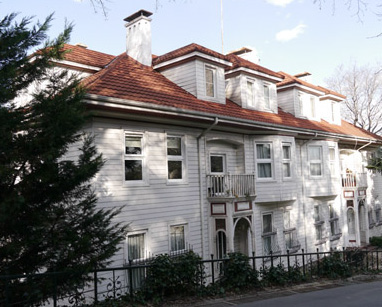 In order to celebrate the sesquicentennial anniversary of Boğaziçi University and bring the vibrant intellectual atmosphere of the campus into broader public focus, the Rectorate launched a new residency program to host established as well as emerging writers, artists and thinkers in the residency flat of the Tubini House on its campus in Bebek.

Three-fold and mutually enforcing objectives of the Boğaziçi Chronicles are:

> to improve the quality of campus life and celebrate the already vibrant intellectual and cultural life on campus;

> to provide an opportunity for the resident to gain a better and in-depth appreciation of Istanbul and the region within the unhurried context of an extended stay, and, of course;

> to contribute to the cultural commons of Istanbul and Turkey by placing the University and its vibrant intellectual atmosphere on the map.

The residents are contributing to the campus life at various levels depending on the length of the stay. While the overarching theme of Boğaziçi Chronicles is providing an ongoing thread across residencies, each residency has its own custom-made program. An individual program may include inter alia a series of public lectures, poetry/passage readings, or recitals; a retrospective of movies; a retrospective international conference on the work of the luminary; a series of formal and informal get-togethers with students, faculty and interested constituencies; writing workshops with selected students; interviews with selected national as well as international media; tours of the city with interested experts from the University community etc.