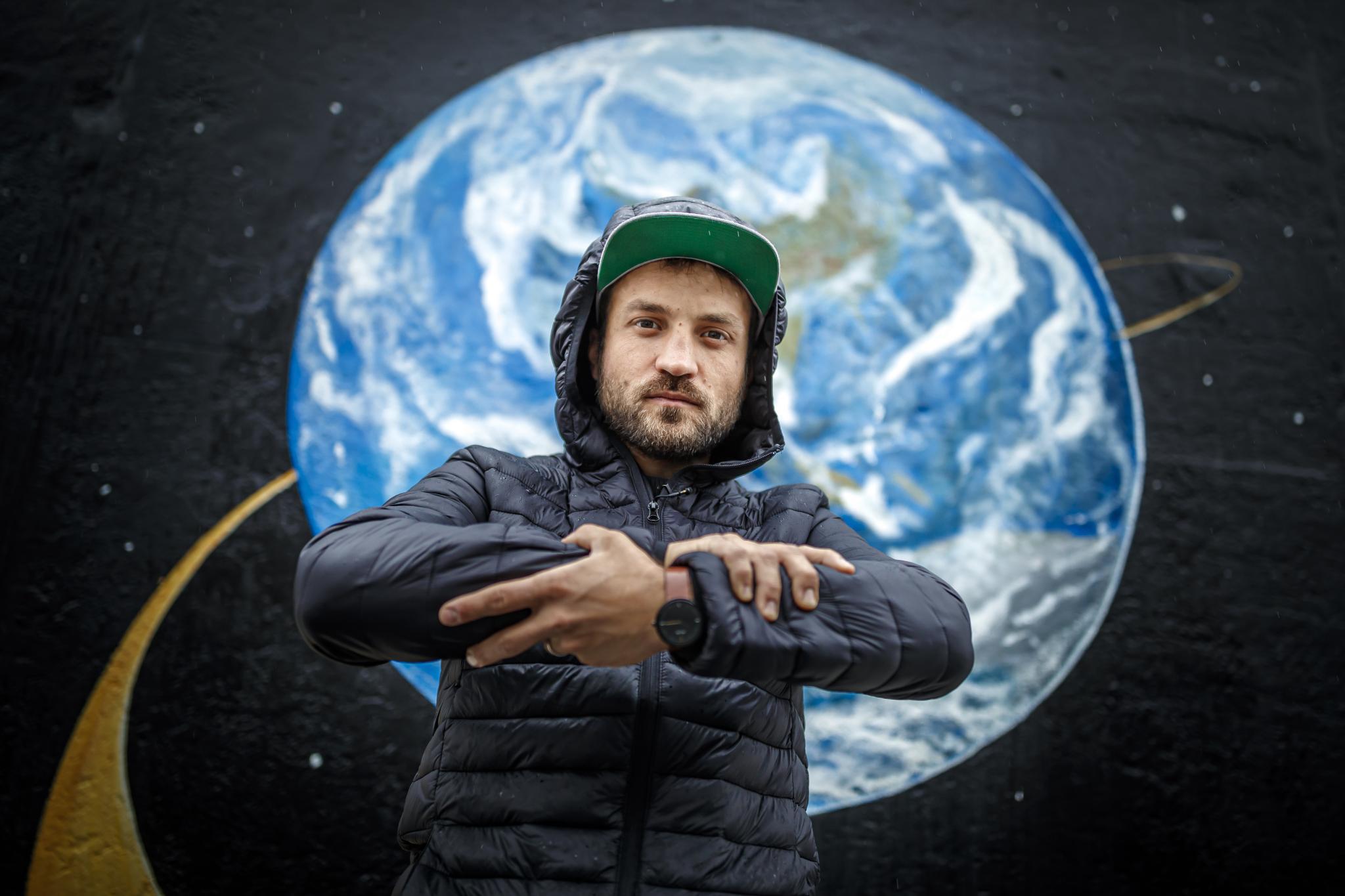 Self-taught, Saype is known today for his paintings on grass, made with eco-responsible paint.

Certainly one of the most publicized artists in 2019, he was notably named by the famous magazine Forbes as one of the thirty most influential personalities under the age of thirty in the world, in the field of art and Culture.

In 2012, just a nurse, challenged by the revolt of the Arab Spring, Saype questions the meaning of our existence and our place in society. He begins to paint scenes in the subway in black and white, where people crowd daily, in an underground greyness well known to our megalopolises.

While Saype explores a rather introspective workshop work, he has been developing a new artistic approach since 2012. Based on the premise that graffiti is diluted in the pollution of our current societies, and that, by extension, no one has any regard for them, Saype seeks to find a new way to appeal to people. Influenced by his readings, his questions as well as by the democratization of drones in Europe which gives him easy access to aerial views, he began to paint on grass.

He then invented a 100% biodegradable paint and perfected a process which enabled him to create gigantic frescoes on the ground. He is now considered a pioneer of a new land art movement.

Since then, these frescoes travel around the world, with a concern to appeal to people and society, minimizing its impact on nature. Its main objective is to put its art at the service of the human being, always with a concern for optimism and in a poetic way.

In 2018, his self-funded project, in support of the SOS Mediterranean association, carried out in the heart of Geneva, had a considerable media impact since it was seen all over the world and by 120 million people.

With this experience and this ability to mobilize thanks to his art, in 2019, Saype embarked on a project of global scope. His Ambition: To symbolically create the largest human chain in the world. This pharaonic project called "Beyond Walls", over several years, aims to pass in more than 30 cities of the world, to invite people to mutual aid, kindness and to live together.

Begun in June 2019 at the foot of the Eiffel Tower, on the Champ de Mars closed to the public for the first time in its history, for two weeks for the event, this fresco has once again left its mark. Supported by the famous British daily newspaper The Guardian which devoted 3 magazine covers to it throughout June, relayed by several hundred media and inaugurated by the Mayor of Paris, Anne Hidalgo, this work has been seen by 500 million people around the world. 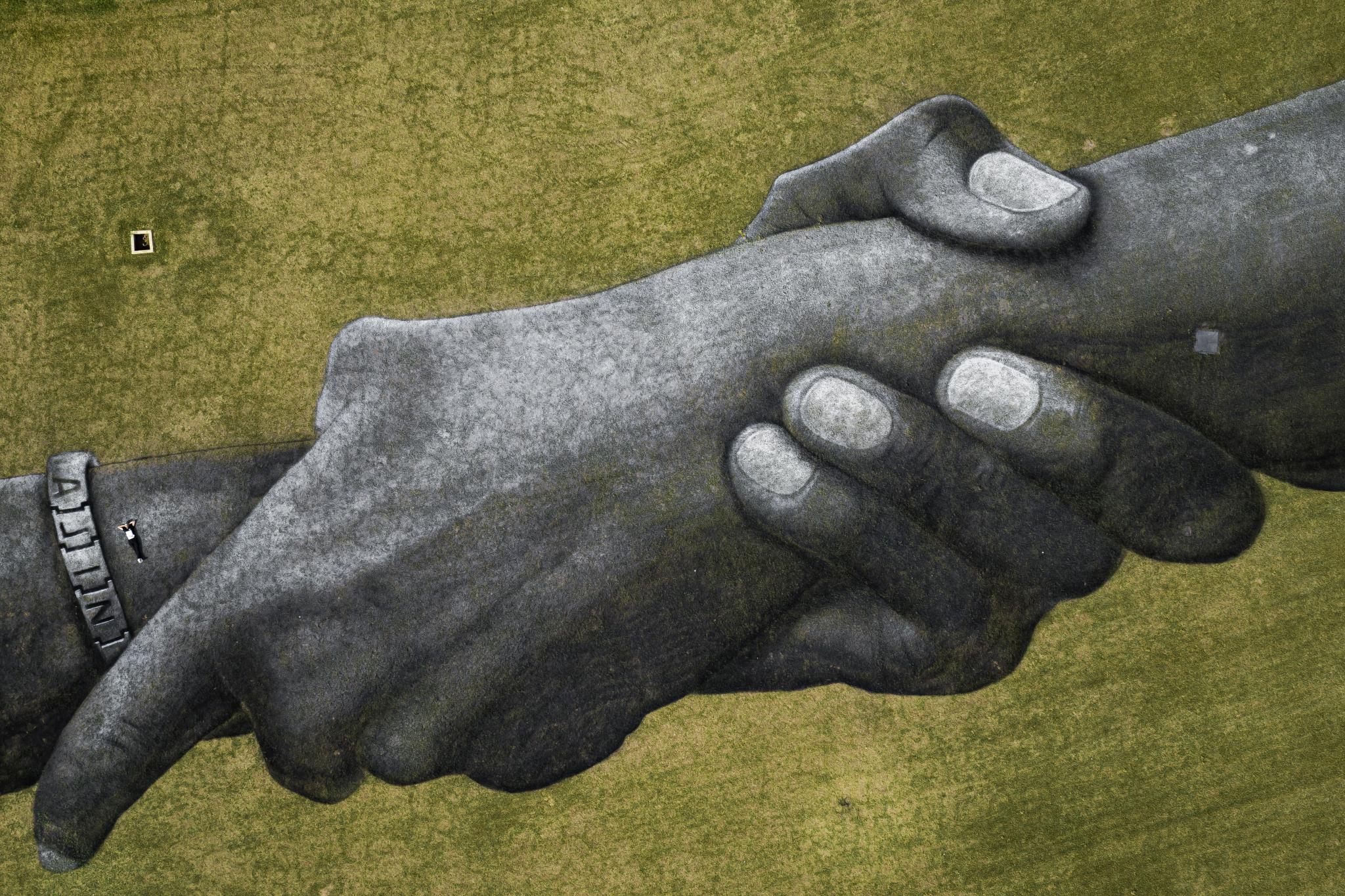 « Beyond Walls » project shows interlaced hands, reaching out, shaking and united in a common effort beyond all walls separating humans and enclosing them in mental or geographical spaces.

Thus, the walls erected in mentalities become fictive partitions, wiped out by artistic imagination. It merely opens a breach in the real walls, the ones built by humanity within and against itself.

In this specific artwork, the symbolic wall crossing does not eliminate the singularity of each of the hands: they all tell a life story and are subtly marked with multiple backgrounds (social, geographical, ethnical, etc.).

Beyond walls and with this universal farandole, every human individuality is granted rights of way and civil ones. The universality conveyed in this project is one of plural humanity.

“Beyond Walls” will cross borders in order to carry out this universal message and make it travel from city to city, all along this immense human chain.